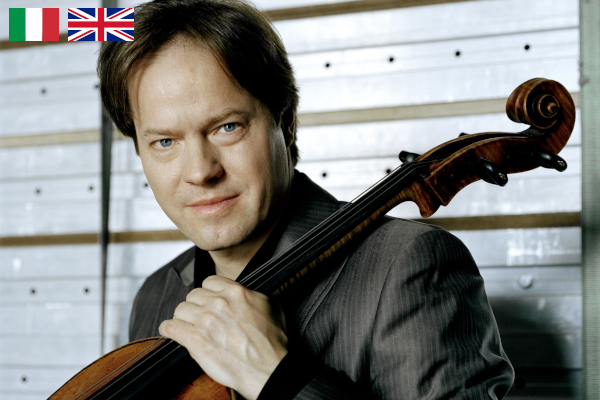 International cellist Jan Vogler speaks us about is experience as performer and in leading festivals as Moritzburg Festival and Dresden Music Festival.

You are a cellist, but in these years you have worked as an entrepreneur for numerous festivals in Germany. How much did your musical training help you and how did you know how to apply it to the administration?

In the beginning it was just an interest in a very different side of our music scene. I was interested in understanding why people come to concerts and how a presenter would decide which artists and programs to present. When we founded the Moritzburg Festival in 1993 experience was the next step, experiencing difficulties and hurdles to come to the beautiful moment when an interested audience meets the artists at the concert. But I would say that my musical training only helped me in very few areas of these ventures, one of those areas was to know which artist to ask for what particular repertoire.

Walking in Dresden, it is easy to see events that involve the city at the festival: how important do you think it is to let the whole city breathe the atmosphere of the event?

Very important! My team and I worked very hard on this aspect, it can take a lot of effort before you see a classical music festival being truly present and creating a festival atmosphere in a city. For us projects like 'Klingende Stadt' and our open air 'Dresden singt und musiziert' helped a lot to bring the festival to the streets.

In this edition, as in the previous ones, have you always involved many buildings in the city center, not just the concert halls, do you think this is a way to make it a "Dresden" festival and not "in Dresden"?

Exactly! If you want to make a city a 'festival city' you have to involve the city in the festival, that is much more effective than the other way around. We are very lucky to have a beautiful 'compact' city center with great venues, modern hotels, restaurant and museums nearby. Building a network of these elements is the key.

Reading the 2019 program, I find world-class artists and orchestras. How do you manage to concentrate all these big names together? How far in advance should you plan the seasons?

Dresden is a music city. When I took over I realized that we have to bring the strongest voices of classical music together, in order to create a festive highlight of the season. It is a combination of planning very early for some events and very late for some others. World music, jazz and cross over acts are usually planned later, famous soloists and orchestras very early.

The German public is historically passionate about music, but at your festivals we often find a large international audience, probably attracted by the great artists present. How do you think you can grow again?

This will of course not be easy. This year we grew 30 percent, that is a strong number ... Every year I am prepared to take a step back, but so far we have had two digit growth every year. Having International audiences is key for a festival that see itself as an international music event.

Your festivals take place mainly in Germany, have you ever thought of experiencing similar experiences in other countries?

Yes, and there are many dreams still to be lived ... But at the moment I feel we still have room to make the festival in Dresden even wider in terms of the music presented and audiences reached. That is our first interest.

Now let's talk about your role as a musician: in recordings and live performances you always look for a lot of executive refinement. Is this also part of intellectual growth?

Absolutely. I feel enriched by all the music I experience. As a performer, as a festival leader and as a human being with a curiosity for art and culture in general.

As a cellist you have traveled a lot, what differences did you find between the different musical realities in Europe and in the world?

I am still very proud of Germany as a country that celebrates classical music, but I also see other regions catching up and bringing out talents and developing new audiences. I am thinking - including the past 3-4 decades - Scandinavia, Asia and South America. There is so much love for classical music.

Do you have any further professions for the future, or do you plan to continue with those already started?

I plan to 'stick to my guns', as they say. Cello playing and performing is my love and my experience in leading festivals is something that I want to use in order to influence and hopefully enrich communities and the music life of our time a bit.

Can you give us some previews for the next editions of the Dresden festival?

Surprise, surprise! We will publish our program in September...;-)

Thanks to Jan Vogler.