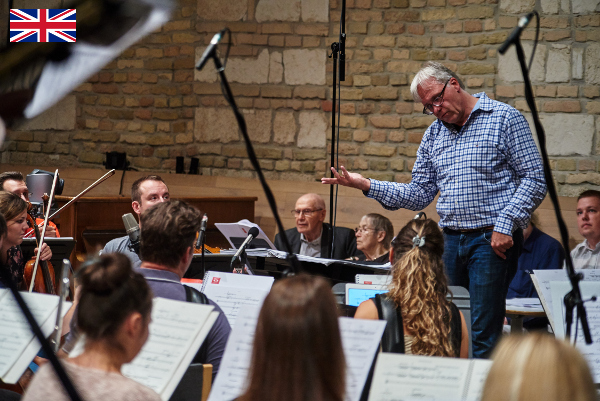 György Kurtág has put Fin de partie by Samuel Beckett to music: two great personalities of music and literature coming together for one of the founding works of twentieth century theatre. The composer, on reaching the age of ninety, has abandoned the short movements he is famous for, to produce an opera of almost two hours in length, without renouncing his attention to musical and expressive detail, creating a piece which is miraculously true to the original text. The writer and the musician, neither mother-tongue, share a meticulous passion for the French language, examining rhythm and meaning in the utmost detail. The sung text refracts into the thousand echoes of an orchestra which is rich in timbre, combinations and, above all, shades of emotion.

The desperate solitude and dense humanity of this work is brought to the stage by Pierre Audi, a director who has presented new works by the most important European composers, developing a working relationship with Kurtág that has lasted for decades. “Beckett saw his theatre as humorous - commented Márta Kurtág, the wife and muse of the composer - but when we see it staged, we need to feel it pull at our hearts”.

Considered by many to be the greatest living composer, Kurtág has written some of his most important works for the human voice, and the idea that he could write an opera has arisen various times during his life, ever since he began studying composition. In the end, it was thanks to the tenacity of Alexander Pereira that the Samuel Beckett: Fin de partie, scènes etmonologues project saw the light after almost ten years of work, premièring at the Piermarini on 15 November, conducted by Markus Stenz and directed by Pierre Audi.

Kurtág, having left Hungary, where the libertarian wave had been repressed in 1956, to take refuge in Paris, where he studied with Messiaen and Milhaud, saw the Paris debut of Fin de partie in 1957, following the advice of György Ligeti. He later purchased the texts for Fin de partie and En attendant Godot, which became “his Bible”, and served as the beginning of a long process of examination of the writings of Beckett, one of the most important stages being What is the Word in 1991. The new opera Samuel Beckett: Fin de partie, scènes etmonologues puts to musicroughly 60% of Beckett’s original text.

A complex network of Milanese and international collaboration has developed around this highly anticipated event. The opera is co-produced with De Nationale Opera of Amsterdam, and the long process of rehearsals leading up to the Scala has taken place in both Amsterdam and the Budapest Music Centre, the home of the composer. In Milan, under the patronage of the Municipality, the 27th edition of the Milano Musica Festival entitled György Kurtág. Ascoltando Beckett, is dedicating 22 concerts, from 20 October to 26 November, to the relationship between the great writer and music, not only that of Kurtág. From 23 October to 4 November, the Piccolo Teatro will be presenting Finale di partita (Endgame) performed by Glauco Mauri and Roberto Sturno, directed by Andrea Baracco, marking an important collaboration between grand Milanese cultural institutions and the encountering of dramatic and musical theatre. Lastly, from 21 October onwards at the Ridotto dei Palchi “A. Toscanini”, it will be possible to see the exhibition György Kurtág, Segni, giochi, messaggi, organised in collaboration with the Paul Sacher Foundation of Basel and Milano Musica.