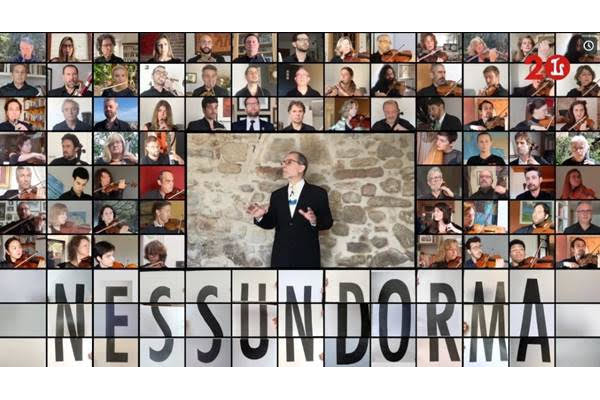 “Vincerò, vincerò” (I will win, I will win) are the last words song by Calaf in the famous aria “Nessun Dorma” of the opera Turandot. Undoubtedly, one of the most encouraging hymn of the entire history of opera and the Liceu, as well, that in 1999 reopened after that fateful fire with this Puccini’s title. Now that we are talking about first measures to lift the lockdown and, as a society, we are starting to rebuild from this setback, the famous aria becomes more symbolic than ever. A symbol of resilience that the Liceu wants to share with citizens to show that it is possible to raise again after difficult times. Therefore, the musicians of the Orchestra and Chorus of the Gran Teatre del Liceu, accompanied by the tenor Jorge de León -who had just inaugurated the current season of the 20th anniversary performing Calaf-, have decided to perform this area again in a spectacular video that wants to give courage to everyone. A way to draw up together the path to hope as well as to expand its support to all those persons and families that have undergone the Covid-19 close up. An audio-visual hymn full of hope, future and unity that features the musical direction of maestro Josep Pons and the creative direction of Igor Cortadellas.

The multiscreen video that the Liceu disseminate today is the result of many hours of videoconferencing with the 142 participating artists, 86 members of the Orchestra and 53 of Chorus, with their chorus director Conxita Garcia, the voice of Jorge de León and the conducting of Josep Pons. From all these artists’ homes and through the power of music, the audio-visual pays tribute to Barcelona too, that start showing the empty streets and finish becoming again the dazzling Barcelona we know, full of people and life. A good way to encourage this brave and resilient society to sing this hymn and remember that history is full of setbacks, but just those make us grow stronger and, as we had made in other dark moments before, this time we will keep on going, and we will win.