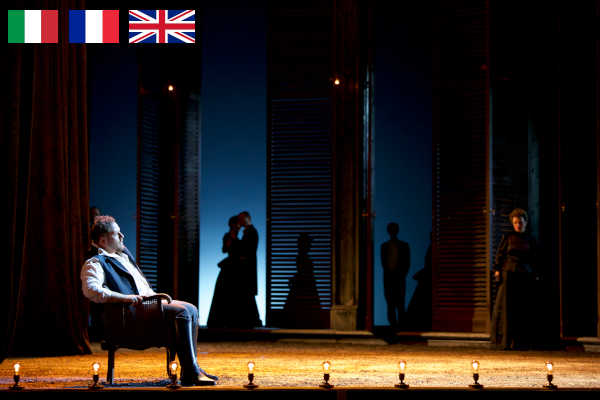 Munich, 18 October 2020 - As usual with this work, from the first measure of the overture, we were seized by the inexorability of the destinies that were about to develop before us. The story of Tatjana and Onegin, that always makes us brood upon the lives of women in the 19th century, and think about a society with such strict morals that the individual must feel muffled, in desperate search of freedom - and how could we not think about Tchaikovsky himself, secretly homosexual, who must have felt this same inexorability in his own life - this story was wonderfully interpreted tonight. The theatre’s orchestra was conducted with rhythm, energy and sensitivity by Anthony Bramall. Due to this year’s cultural bane, Covid-19, the orchestra had been delicately and effectively reduced by Pjotr Aleksandrovich Klimov.

At the very beginning we encountered four women: Filipjevna, the old nurse, Madama Larina, the lady of the house, sung by Ann-Katrin Naidu, and her two daughters. The elder women talked about women’s lives and loves, or the lack thereof, about arranged marriages and how to find contentment in life. This new production is set in the 19th century, and stage director Ben Baur, who was also responsible for the lovely set, has chosen a style of refined simplicity: one set was enough for the entire piece, a series of high shutter-doors surrounded the stage on one side in half-circle. A few pieces of furniture, chairs, a bed… were enough. Michael Heidinger’s subtle lighting did the rest: it was warm, often quite mild, there were candles and torches, there was a row of orangish lightbulbs at the front of the stage that brightened balls and parties… With all this came the choreographies by Lillian Stillwell that also translated the energies of the moment, be it the exuberance of a country feast or the stilted dancing at a bourgeois ball. And then there were Ute Meenen’s costumes, just as lovely and suggestive. The young ladies were wearing light white dresses, that look almost like underclothing, the mother a heavy dark red matronly gown and now without further ado we must pay our tributes to Anna Agathonos who played the nurse: she appeared in nightgown and slippers, white hair unbound and shuffling her feet. So convincing was she that we were surprised to hear her strong and generous mezzo-soprano voice. A special bravo for her!

Tatjana was a romantic girl, waiting for her knight in shining armour. Olga, interpreted by Emma Sventelius, lived in the moment, all she wanted is to dance and have fun. Now arrived her fiancé, Lenski and his friend, Onegin. Onegin, a man of the world, was presented as a kind of gentleman-farmer: in boots, waistcoat, rolled-up shirtsleeves he gave the impression of strength, competence, trustworthiness and experience. He also turned out to be sensitive. That was enough for Tatjana to fall in love with him. On the same evening, alone in her room, she wrote him a letter confessing her love. Mária Celeng, who was Tatjana tonight, played the iconic scene with all the passion of a young woman who is in love for the first time. With her golden soprano voice, she was poignant in her confusion, later she would be poignant in her dignity. The next morning, Onegin turned up and made it very clear that he was not interested. It was Matija Meić who sang the part with a warm and strong voice and he also gave the whole depth of feelings to his character as the story played out.

Pushkin saw in Lenski the symbol of the voice of rural, traditional Russia, whereas Onegin symbolised the modern, cosmopolitan part of society. We saw, with Tchaikovsky, two individuals caught up in the cogwheels of society’s unwritten laws. And this is where the ball began - very prettily staged with wreaths and bunches of flowers - and Tatjana wouldn’t dance with Onegin. So he invited Olga, thus offending Lenski, and in the end the two friends were about to ‟go out”, as the euphemism of the time called it. Lenski appeared in a brown street suit, wearing glasses, quite intellectual next to Onegin’s shirt sleeves. Young tenor Alexis Tsilogannis sung the part tonight, with his pleasing, natural timbre, and he was also very convincing in his grand scene, the farewell to life just before the duel. It was in those arias that the smaller orchestra was the most effective, the dialogues of the singers with the wind instruments most touching, all the more so that the orchestra did cover the singers otherwise every now and then. It was true also for the duet Lenski-Onegin that translated, once again, all the inexorability of the codes of honour of that time. They sang about their friendship and a possible reconciliation, but njet, njet, said Lenski. The two men affronted each other, Lenski lowered his weapon right when Onegin shot, and we will never know if we have seen a suicide or a mortal accident. The transition to Act Three after this was again very well done: we saw Onegin, immobile in a corner where he had dropped down, stunned, shocked, after Lenski’s death. He stayed there up to Gremin’s ball. Levente Páll sang the part of Gremin and if it felt a bit incongruous at first, to see such a young man sing the aria about love that can come at any age, we ended up believing in his Gremin, he sang it so well. The final played out as the ultimate heartbreak, another scene following a letter, mirror image of the first one, or almost. For this time, it was Tatjana turning down Onegin, and yet she said she loved him still. But she was pledged to her husband, pledged in honour, and wouldn’t leave him to flee with Onegin - and she left him standing there. Humiliated, desperate, he broke down. If only, oh yes, if only…

Destiny or a wrong decision? Free will or predestination? Or may we conclude that we should listen to our inner voices instead of those of reason?

A lovely evening, a beautiful production. May it have a long life and see many representations! Thanks and bravo tutti!