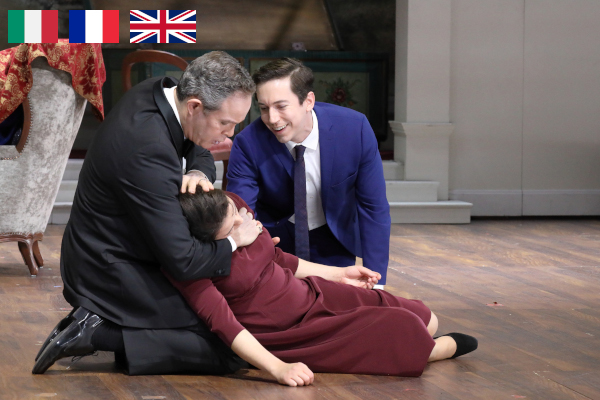 München, March 20, 2022 - It is always delightful to see and hear this masterpiece again, and even more so when the representation is as perfect as tonight’s! Christoph Loy’s staging, dating back to 2018, sets the action in a sober and timeless background, dominated by the themes of theatre and doors. During the overture, a puppet-theatre scene anticipates the triangle Figaro - Susanna - Cherubino. The real-life Figaro climbs out of the puppet-stages depths, interacts briefly with the puppet Susanna, and finally gets down on the big scene. The puppet-theatre disappears with the opening curtain, and here we go: cinque - dieci - venti - trenta. The set of Act I is dominated by another theatre stage in the background, complete with storm-threatening outside decoration; the furniture consists of an armchair, and a few chairs. Later, we will see the same background behind a collection of shoes: the Countess’s dressing-room. During Act III, the outside background will have disappeared, the theatre stage is empty and white and is being watched by a crowd of chairs, and the armchair is still here, almost a full-fledged character, it will serve all the protagonists at a certain moment. And then the doors: they will grow from act to act, in keeping with things going wrong for Figaro.

Right from the overture, we have been able to appreciate the qualities of an exceptional conductor. Christopher Moulds radiates a joyful energy, suffusing the orchestra’s sound with a golden warmth; he treats the recitatives with particular care, thus enhancing the dramatic content of the following number; his tempo changes are sometimes dramatic, but always well thought out, and many hidden details in the orchestration are shiningly revealed.

To our even greater enjoyment, the cast is just as wonderful. Katharina Konradi’s Susanna is delicious, spirited and determined, her voice a marvel of amber warmth, and from the beginning we were looking forward to the Aria of Act IV, and we were not disappointed. The man by her side, Figaro, is interpreted by Luca Pisaroni, a safe bet when it comes to excellent acting skills, and whose strong voice with its distinct timbre is beautifully mellowing over the years. He shows us a Figaro affected by deep emotions, between rage and jealousy, and all his arias are vibrant with intensity. The interaction with Anne-Sofie von Otter’s Marcellina is quite moving, especially in Act IV, when she sings ‟Abendempfindung” instead of the Aria of the Goats, a very good choice of replacement, and sung with all the emotion of a mother who reminds her child of her mortality. There is nothing ridiculous now in Marcellina, who is usually portrayed as an aging predator, gaining some dignity only as she takes on the mother role. The same goes for Bartolo. Maurizio Muraro incarnates him with drive, some irony, and a strong bass voice - and we admire in passing the dignity with which he wears his most astonishing hairdo. As to the noble couple of Almaviva: Olga Beszmertna is amazing in the role of the Countess, with a rich resounding voice and beautiful silver filigree pianissimos, and just as fabulous Gerald Finley as the tragicomical Count. His mellow voice becomes hardened in the grand aria of Act III, cajoling in the duet with Susanna, and perplexed when he finds himself duped once again. All these voices come together most beautifully in the ensembles, and each time we are impressed by the maestro’s wise choice of tempo, the dialogues are coming right on time, in perfect comedy timing, and then, things will slow down for a moment before picking up speed again - and we laugh out loud, holding our breath at the same time, because all this is so just, and good, and simply perfect. In the ensembles, the voice of Samantha Hankey alias Cherubino blends in perfectly, whilst we found her, although technically faultless, somewhat too high for a male character. A pity, because physically, with the gangly grace of a long-limbed teenager, dynamic, agile and androgynous as they come, she would make a perfect Cherubino. Danae Kontora’s Barbarina is perfect, with a juvenile and agile voice, not a woman yet, nor a little girl, very moving in the aria of Act IV. Also admirable are Jonas Hacker’s Basilio, Emiliano Gonzalez Toro, a perfectly stuttering Don Curzio, and Karel Martin Ludvik as Antonio.

A perfect cast, a perfect opera night, and a reminder that humans are capable not only of war and destruction, and that it might be a pity, after all, if it destroyed itself. The applause is well earned, and takes another signification when Olga Beszmerta comes to take her bow behind a Ukrainian flag. Welcome to reality - and yet…

Bravi tutti and heartfelt thanks for a wonderful time!