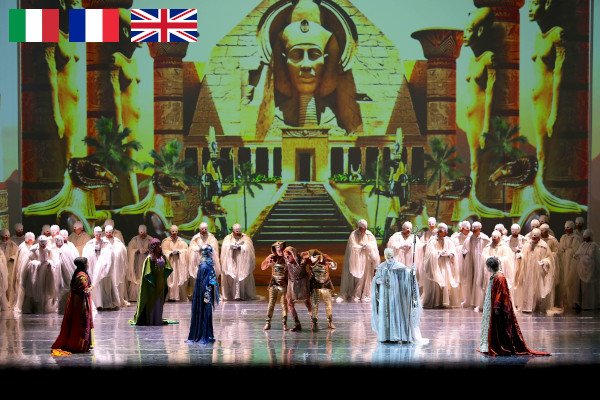 Colorful and not much else

Amazing, intersting, but not thrilling Aida at Teatro Carlo Fenice in Genoa. Maria Teresa Leva is a moving and convincing Ethiopian princess

Genoa, December 15th, 2018 - Aida and Radames are among the great tragical couples of opera, their story is one of love and guilt, of treason and jealousy. It was told tonight by the team of artists from Teatro Carlo Fenice in Genoa. Alfonso Antoniozzi’s shoddy staging was saved by the amazing videographics by Monica Manganelli. Turn by turn scenography and freely roaming light effects, they showed Egypt-inspired architectures, bleak sandscapes that made us think of the Dune series, gates and stairways, or else abstract figures, rays of light dancing, exploding, always in tune as it were to the music, colorful and evocative. We were puzzled by the attire of the Ethiopian prisoners: Aida and her father, Ethiopian king Amonasro, are certainly of a race as noble as the Egyptians, why then did their warriors have to look like something out of every colonialist’s dream? Loincloths, tribal face paint, spears… And why did the dancers that perform the ballet scenes - and the choreography was so boring that it was nothing short of torture - have to wear nude suits? The other costumes were quite beautiful and characterizing, especially Aida’s flowing gown, in orange and reds, and Amneris’ jealousy-green dresses. Amneris was sung tonight by Alessandra Volpe, who revealed her voice only in Act III, when she dropped some of her obnoxious vibrato. Maria Teresa Leva’s Aida was moving and convincing from the start. Her high notes were subtle and sweet, and her pianissimi still held power. Amadi Lagha was a creditable Radames, with a full and round tenor voice, however sounding somewhat strained at times. It was Sergio Bologna in the role of Amonasro who stole the scene from Fabrizio Beggi’s Ramfis. He has a powerful warm baritone, and a strong stage presence whereas Ramfis looked like something out of Star Wars, and maybe all that white paint affected his voice.

A few technical details should be noted as well: the subtitles sometimes were not synchronized to the stage events, and the video screen went blank at one point.

An interesting show on the whole, that was greeted with much applause.