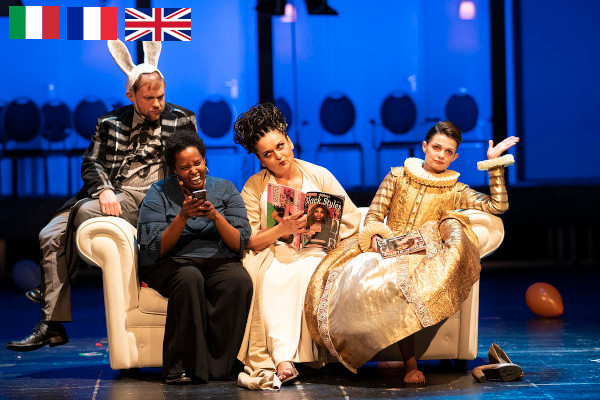 Not entirely convincing, however interesting, is the project by the Opera of Halle/Saale about the Grand Opéra by Meyerbeer

Halle, June 29, 2019 - On this very day, young sea captain Carola Rackete took her ship, the Sea Watch 3 into the port of Lampedusa in Italy, standing up to Italy’s interdiction and ready to go into prison for her action, in order to take to security some 50 people she had saved from the sea, fleeing violence and misery in Africa: reflexions about Europe’s colonialism in the past and in the present are certainly in order.

The opera of Halle/Saale in Germany has undertaken an ambitious project in this sense, based on Giacomo Meyerbeer’s Grand Opera L’Africaine, a series of four distinct shows, the last of which we got to see tonight.

Intended as a trial to „de-colonize” opera, this show cannot make up its mind if it’s a show or a public discussion: a very mixed group of people - the singers of Meyerbeer’s opera, the stage director and the librettist of the new show as well as divers Africans - are on the stage. A scene of the Meyerbeer opera is sung, then the hidden racist content of the text is discussed. Music, discussion, people getting angry, everything starts anew… Sometimes it’s funny, a bit auto-ironic, when opera as a genre is making fun of itself, (especially Matthias Koziorowski as Vasco de Gama), sometimes it’s frankly boring. Sometimes one gets the feeling that something new and really exciting is about to happen, when a choir sings a contemporary newly composed piece on a poetically political text. These interventions, composed by South African composer Richard van Schoor, who has recently carried off a notable success and proven his vocation as an opera composer, are of a deeply moving and dramatic musical essence. They could carry the show to a real reflexion or maybe even some musical catharsis. Alas, there are only two of those and the rest is Meyerbeer.

Once we have put behind the first moments of perplexity, once we have grasped the concept and understood that nothing really new and exciting is going to happen, all that’s left for us is enjoyment of the music, very beautiful and beautifully executed. In the end, we agree with the protagonists, when they decide that this is not the right way to exorcise the musical genre of opera of its hidden contents. During the introduction we had been told that there will be another suite of events next spring in Lübeck, partner of this venture, containing a whole opera written by van Schoor, and we promise ourselves a visit there. It might be more conclusive.

Let’s praise however the people who have participated in this adventure: the singers first of all who managed to stay in character by stepping out of it - Matthias Koziorowski in the role of Vasco de Gama, Romelia Lichtenstein as Selika, Liudmilla Lokaichuk as Ines, Gerd Vogel’s Grand Inquisiteur, and all the others who made this evening at least musically enjoyable.

Let’s praise the courage of the whole team and the Halle opera for having initiated this research - and let’s wait for another occasion to think about Africa and Europe.