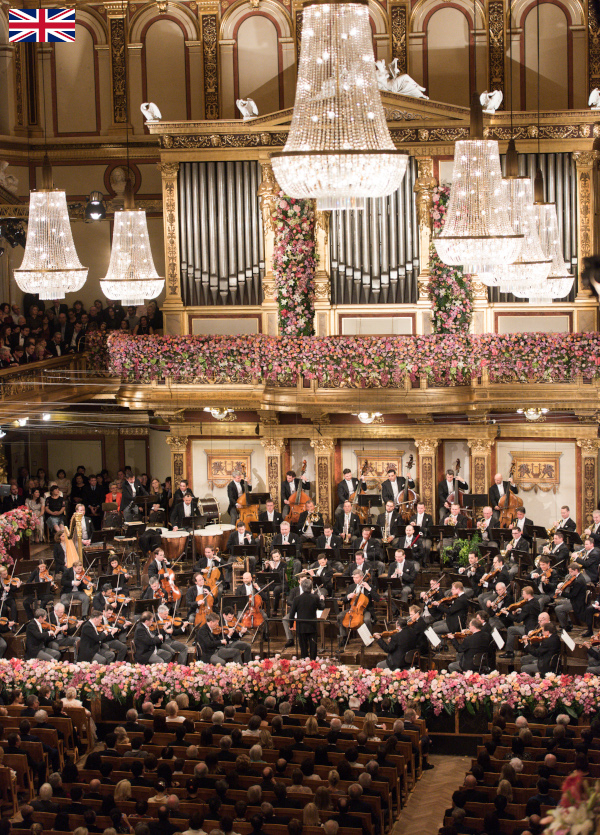 This is the sixth time that Naples-born conductor Riccardo Muti is in charge of a New Year's Concert with the Vienna Philharmonic, an orchestra with which he has been closely associated for exactly half a century, appearing with them a total of 550 times to date and enjoying the status of an honorary member since 2011. It makes sense, then, to honour his forthcoming eightieth birthday with a programme of works that recall his native Italy.

The 2021 New Year's Concert begins with a piece not previously performed by the Vienna Philharmonic, Franz von Suppè's Fatinitza March. This march comes from the third act of the operetta of the same name. Premiered at Vienna's Carltheater in 1876, Fatinitza takes as its starting point a love affair and a comedy of disguise set near the Ottoman fortress of Isaccea during the Crimean War of 1853–56, when the town was besieged by Russian forces. Reviewing the first production, the Wiener Abendpost summed up its plot as "the usual Viennese potatosalad garnished with segments of Italian oranges; Viennese songs and dances and, immediately afterwards, a kind of Italian preghiera!" Audiences loved this combination of flavours. Even on the first night, the march had tobe repeated, and within months of the premiere 350,000 copies of the score of this particular number had been sold by music dealers.

Also new to the Vienna Philharmonic's reper tor y is the waltz S ch a l l w e l l e n(Sound Waves) that was written for the Technicians' Ball in the Sophienbad - Saal in 1854. In part the piece reminds us of physical sound waves, notably the sound of pealing bells in the fifth part of the waltz, but it also contains echoes of the music of two of Johann Strauß's fellow composers, Giuseppe Verdi and Richard Wagner. It was the younger Strauß, after all, who first performed excerpts from Wagner’s works at this period in Vienna: in 1853 he introduced local audiences to the prelude to Act Three of Lohengrin and to the Pilgrims' Chorus from Tannhäuser , while the overture to Tannhäuser was first heard at a Sophienbad-Saal concert in 1854.

Strauß spent the summer of 1859 at the resort of Pavlovsk to the south of St. Petersburg, and it was here that he wrote his Niko Polka for Prince Nikolay ('Niko') Davidovich Dadian - Mingrelsky, a piece inspired by Russian motifs and featuring some remarkable instrumentation and characteristic minor - key harmonies. Nikolay hailed from the Caucasus but lived in St. Petersburg and visited nearby Pavlovsk. Strauß was on friendly terms with him and his family.

We stay at Pavlovsk for Ohne Sorgen(Without a Care), where an already ailing Josef Strauß spent his last summer with his brother. It was not only his health that filled him with care, so too did the uncertain future of the summer seasons that had brought him and his family to the resort for many years, although there is no trace of any such worries in the demonstratively optimistic quick polka that was first per formed there – with vocal contributions from the orchestra – in September 1869. Neither of the brothers ever returned to Pavlovsk.

The next two composers made their posthumous Philharmonic debuts only in 2021: Carl Zeller and Carl Millöcker are nowadays known chiefly for their operettas. Zeller was still a child when he first encountered the musicians of the Vienna Philharmonic, a body of players that had been formed in the year of his birth, 1842: he per formed alongside them in per formances of Masses in the Court Chapel, where he sang as a boy soprano. A civil servant by profession, he studied music on the side and composed his works in keeping with a line from his operetta Der Obersteiger(The Foreman of the Mine) , which was premiered at the Theater an der Wien in 1894: "The bureaucrat does his job from nine till one – but never does anything more than this ." The concert waltz G ru b e n l i ch te r ( Davy Lamps )is based on motifs from the operetta . The por table miners' lamps are indicativeof the place where the work is set, namely, a mine in southern Germany. The operetta even opens with a call for a strike.

Carl Millöcker was likewise born in 1842. He too knew the Vienna Philharmonic from his earliest youth since he studied the flute with one of the orchestra's founder members, Franz Zierer. The galop In Saus und Braus(Living It Up) comes from the operettaDer Probekuss ( The Trial Kiss ) , which, like Zeller'sDer Obersteiger, waspremiered at the Theater an der Wien in 1894.

Millöcker was only sixteen when Franz von Suppè signed him up as a flautist at the Theater in der Josefstadt, later recommending him as a conductor at the theatre in Graz. At the 2021 New Year's Concert the overture to the comedy D i ch te r u n d B a u e r(Poet and Peasant) likewise leads directly from Millöcker to Suppè. Suppè did not initially intend this popular overture, with its great violoncello and harp solo, for Carl Elmar's 1846 comedy since he had already used it on no fewer than two previous occasions. But it owes its popularity to this revised version and to its echoes of the Italian bel canto tradition. It was in this form, too, that it found its way into the repertory of the Strauß orchestra.

Karl Komzák was born in Prague, the son of a local bandmaster, a career that he too embraced. His best - known waltz is Bad'ner Mad'ln(Girls of Baden), its march rhythms and fanfare motifs making no attempt to deny its origins in band music. It was written in 1898 in the spa town of Baden, thirty kilometres (about twenty miles) to the south of Vienna, where Komzák took over the town’s band in 1893 and gave it a new lease of life. It was here, too, that both Zeller and Millöcker spent the final months of their lives. Komzák's waltz was heard for the first time at a concert in the resort’s public gardens as part of a programme that also included works by Liszt and Tchaikovsky.

It is hard to think of a greater contrast than the one between Komzák's swaggering waltz and Josef Strauß's elegant Margherita Polka, a piece that once again forges a link between Austria and Italy. It was written in 1868 to celebrate the wedding of Princess Margherita of Genoa and her cousin, Crown Prince Umberto of Italy. It was not in fact per formed at the festivities accompanying the royal couple's actual ceremony, even though the work's publishers implied this in their attempt to drum up trade. And so it was not the newlyweds who heard its first per formance but the audience at a promenade concert held by Vienna’s Horticultural Society.

T h e Ve n e t i a n e r - G a l o p p(Ve n e t i a n G a l o p) by Johann Strauß the Father is the oldest work in this year's programme. It was first heard as part of a gala ball held in the Vienna Augarten in 1834, when the sets were inspired by St Mark's Square in Venice. Although the clicking of the castanets may have little to do with the atmosphere traditionally associated with La Serenissima, it may none the less represent the clinking coins of the composer's income from this night at the ball. As reported by the press, the figure of 2,000 florins would have constituted a decent year's income for many a musician at the imperial cour t .

J o h a n n St r a u ß's popular waltz F r ü h l i n g s s t i m m e n(Voices of Spring) was originally a setting of words by Richard Genée, the librettist of Die Fleder maus and Fa t i n i t z a. The "voices of spring" were those of the lark and nightingale that were amply hymned in the original coloratura soprano aria but they are equally ef fective in the instrumental version that was first heard in the Golden Hall of the Musikverein in 1883 at a promenade concert with the Strauß orchestra that also included a buf fet.

The lively twittering of songbirds may also be heard in Strauß's polka Im Krapfenwald'l(In Krapf's Woods), where it contributes to the feeling of local colour and provides a breath of escapism in the ver y best sense of the term. It was originally written in 1869 for Strauß's final summer season in Pavlovsk, when it was titled ImPawlowsk - Walde (In the Pavlovsk Woods), but for its first performance in Vienna Strauß relocated its setting to apopular woodland area with a tavern in the foothills of the Vienna Woods. Since the 1920s this part of the city’s environs has also included an inviting open - air swimming pool commanding a magnificent view of the surroun-ding area that is also immensely popular with members of the Vienna Philharmonic and with their children.

The Neue Melodien - Quadrille(New Melodies Quadrille) of 1861 is Strauß 's tribute to the Imperial and Royal Court Opera Orchestra and, hence, indirectly to the Vienna Philharmonic. In it he reworked tunes from four of Verdi's operas, Ernani, Rigoletto, Il Trovatore and La Traviata, which he and his audience knew from the Court Opera repertory. In some cases the melodies have been adapted in rhythmically startling ways.

If Strauß's Quadrille invites us to guess the Italian tunes on which it is based, the situation is by no means as clear - cut in the case of the title of the Kaiser walzer(Emperor Waltz). This piece was originally called Hand inHand , and it was under this title that its first per formance was advertised in Berlin in 1889. As such, this titlerefers to the alliance between two emperors, the Habsburg emperor Franz Joseph and his Berlin host, Kaiser Wilhelm II of the House of Hohenzollern. The political background of this alliance between the Habsburg and Hohenzollern Empires is recalled in the waltz's marchlike opening but the remainder of the piece – one of the high points of Strauß's musical output – strikes a much more nuanced note. Perhaps the Two Emperors' Waltz would be a more exact title.

The 2021 New Year's Concer t ends of ficially with a piece titled St ü r m i s ch i n Lieb' und Tanz(Tempestuous inLove and Dance), the very title of which can suggest only a frenzied quick polka.Johann Straußwrote it in 1881for the annual ball of Concordia, the association of local journalists and writers, basing it on motifs from his operetta Das Spitzentuch der Königin (The Queen's Lace Handkerchief) . The performance was conducted by the composer's brother, Eduard, who had engaged a writer to provide titles for the dances that members of the Strauß family tossed off in such quick succession. In the present case the title turned out to be especially dynamic.