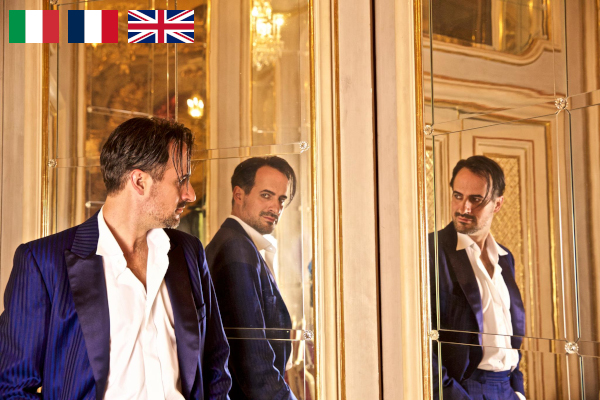 Munich, le 14 juin 2022 - At the wonderful Gärtnerplatztheater, members of its ensemble come regularly into their own with Lied recitals in the public foyer. Tonight, baritone Mathias Hausmann treated us to a choice of very different but immensely dramatic pieces by Schubert, Liszt, Wolf and Mahler. Following a chronological order, the recital was not only exciting and entertaining to hear, it also showed the developments in Lied composition through the 19th century and highlighted the differences between contemporary composers such as Wolf and Mahler.

Hausmann, whom had already impressed us with his powerful warm voice, his versatile singing, and his energetic stage presence, effortlessly rose to the occasion.

His subtle intonation gave meaning and substance to every word and Ekaterina Tarnopolskaja piano accompaniment was just as subtle and clear. He was the fearful maiden and he was soothing death in Schubert’s ‟Der Tod und das Mädchen”; he was the narrator, the father, the child and the elven-king in ‟Erlkönig”, while Ekaterina Tarnopolskaja hammered out the galloping rhythm, and the old story, retold time and again, gripped us once more, and we thought of Goethe’s rejection of Schubert’s composition and what a pity it is that he never got to know how popular his ballad is today thanks to Schubert.

The pianist calmly and competently then enchanted us with two ballads by Brahms, opening the way to Liszt’s melodrama ‟Der traurige Mönch” with its wonderful piano part. It is rare to hear a piece of this genre, where the singer uses his speaking voice and we enjoyed it all the more. From Sweden, where this story is set, we were then taken to France and Spain, and through the story of Gastibelza on a text by Victor Hugo. Immensely dramatic is the story of the man who is driven crazy by the mountain winds and the loss of his beloved, with its fiery Bolero rhythm and again both musicians left us breathless.

Another galloping horse, and the darting flames in the piano part of Wolf’s ‟Feuerreiter”, and from the passion of Gastibelza to the compassion of the last verse of Mörike’s poem, soothing and consoling as death in the Schubert lied. Another text by Mörike enjoined us to remember that there may be a flower growing already that will bloom on our grave, and again the singer got the melancholy thoughtfulness of the text just right. With Wolf’s ‟Rattenfänger”, again on a text by Goethe, we came to a lighter, more humorous mood, and the recital was concluded with three lieder by Mahler, based on popular melodies and texts, light and lovely as can be, and the perfect conclusion to a most lovely evening.