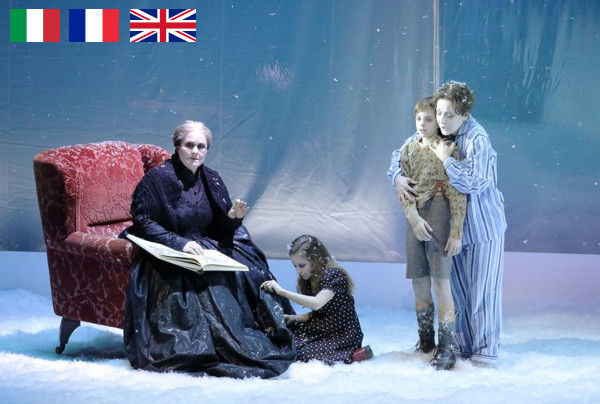 In the new production of The Snow Queen by Hans Abrahamsen, stage director Andreas Kriegenburg uses new metaphors without ruining its original symbolis in a multi-layered lecture. A performance to remember.

MUNICH, December 28, 2019 - It is a somewhat audacious endeavor to stage a fairytale using new metaphors without ruining its original symbolism. In this new production of Hans Abrahamsen’s opera The Snow Queen (2019), stage director Andreas Kriegenburg carries it off with a flourish. His is a multi-layered lecture, resulting in an intricate performance, where several interpretations co-exist: the story of Kay and Gerda is acted out by three pairs of protagonists. There are the children, played by children. There are the children played and sung by adults, acting out the story as written by Hans Abrahamsen and Henrik Engelbrecht, after Andersen, and composed by Abrahamsen. And there are the adults, acting out the same story, interpreted in a different way. In this narrative, Kay, who has been stung by two shards of the devil’s mirror and abducted by the Snow Queen, is a man suffering from some mental disorder that makes him unable to communicate with Gerda. In both of the adult narratives, Gerda is played and sung by Barbara Hannigan, whereas Kay as a sick man is a mute role, played by Thomas Gräßle and the original Kay is sung and play by mezzo-soprano Rachael Wilson.

It’s a cold world that is described here, the scenography is cold throughout, cold colors, cold lighting, falling snow; the background a hospital universe that is cold as well, and frightening at times. The choir in nurses’s uniforms with enormous hats, or else in surgeons gowns, goggles hiding eyes. The music holds the balance between dreamlike and cold, a bit longish, a bit monotonous at times, but mostly effective and dramatic. The ensemble scenes and chorus parts are lovely moments where beautiful voices come together. Fairytale, dream, hallucination are woven together here, raising questions, stirring emotions. Estrangement comes to mind - when Kay gets stung in the eye and perceives everything as ugly. Is his coldness and estrangement an echo of our own coldness and estrangement from the natural world?

It’s a powerful performance, that takes us into its own world, and the inhabitants of this world are strong and believable characters. Barbara Hannigan as Gerda, masterly singer and performer that she is, singing the demanding music as if it were a children’s song, acting with elegance and poise, is on stage most of the time and imprints her presence on every scene. Rachael Wilson, mezzo-soprano, as Kay, is simply wonderful. An interesting feature is the casting of a bass in the role of the Snow Queen. Whilst it positions the character in the vicinity to The Wise Man, to Sarastro, Merlin and the like, it breaks the chain that leads from the Wise Woman to the Goddess herself. Peter Rose sings the part, but he is most notable in the part of The Reindeer, with his droll hand movements and walk, where he has more to say as well. The minor characters are powerful representations of their symbolic value, be it the two Crows (Castle Crow, tenor Kevin Connors, Forest Crow, countertenor Owen Willetts) or the Prince (tenor Dean Power) and Princess soprano Caroline Wettergren), or the Grandmother/Old Lady/Finn Woman (mezzo-soprano Katarina Dalayman) and they are all of the memorably played and sung.

Under the baton of Cornelius Meister, with the orchestra and choir of Bayerische Staatsoper, a most effective opera evening all in all, thought-provoking, stirring and colorful: we wish this opera many happy returns. Bravi tutti!