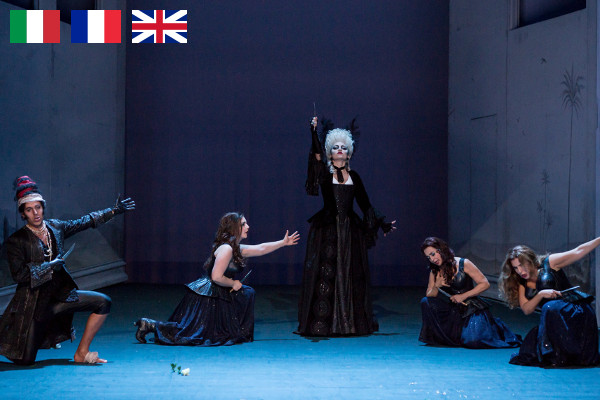 MUNICH, September 13, 2020 -  In these dark times, the message of the Magic Flute takes on an eerie hue of actuality. This multi-facetted work, that either can be read according to Freud or according to Marx, and is often descried for its racist or anti-feminist lines, a work that is so musically rich, a work that we tend to consume as a form of entertainment, well, today this work hits home again, and proves that in these times more than ever, the light that music brings into our lives is an utter necessity.

Maybe this is the reason why the Gärtnerplatztheater started its 2020/2021 season with two performances of its 2010 production, staged by Rosamund Gilmore, with costumes by Nicola Reichert.

Performances that were adapted to the situation, of course: Andreas N. Tarkmann reduced the orchestra to one instrument per part, giving room to a filigree, clear sound that brought to light certain melodic lines that usually are swallowed by the tutti. We rapidly >got used to this sound, a sound that certainly had the advantage of never covering the singers. One has to pay honors Michael Brandstätter and the Orchestra of the Staatstheater am Gärtnerplatz, who worked with intense concentration and managed the balancing act between chamber music and opera orchestra without us feeling deprived of anything at all. A huge bravo shout to them!

Friedrich Oberle’s sets were minimized to a background screen upon which were projected in turns night skies with clouds and moon, naked branches, or just some smoke curls. And this was enough, for there were the fabulous costumes and the acting and singing of the interpreters, not to forget the ballet dancers of the theatre. They held the scene from the overture on, and in certain following scenes, with wild animals. A gorilla, a hyena, a warthog, a panther and a wading bird, very elegant with two canes - they were characterized by masks and rococo-style costumes of night blue, and danced elegant and ironic menuets. Dark blue rococo elegance also for the Three Ladies,  finely sung by Mária Celeng, Anna-Katharina Tonauer and Anna Agathonos, beautiful voices that came together harmoniously. Tenor Gyula Rab’s lovely voice didn’t really lift off in the portrait aria, it was only later, especially in Act II, when Tamino and Pamina come together ‟Tamino mein…‟ - ‟Pamina mein…” — these two lines in which Mozart expresses more than other composers in a ten-minute-duet — that we got to fully appreciate it. Elegant and princely, in a white suit, a kind of rococo without the frills, that already >announced the Enlightenment period, moving and proud, he was the perfect Tamino. Judith Spießer in the role of Pamina was just as wonderful: with a clear and warm soprano voice, a warm and sweet stage presence, she was just a delight to hear and see. As were her costumes: if she wore at first a yellow dress with a blue apron, calling to mind Disney’s Snow-white, later she appeared in a white Regency gown. Those costumes, we understood, were meant to express the antagonism between the arrival of the Enlightenment and the ancient mindset, a potpourri of beliefs and superstitions. As a last example, there was Sarastro, who wore the tailcoat of 19th century scientists, or else grand robes of yellow, with wide pleated sleeves - a shroud of light. Young bass Sava Vemiç gave him voice and life, and he was impressive. With his deep and clear voice, and his strong and calm stage presence, he incarnated perfectly the wise priest, this paternal and kindly character. When he sang his aria „In diesen heil’gen Hallen”, we were hanging onto his lips, wanting it to be true, wishing for a world where revenge does not exist, where kindness and education prevail. Wondering at the same time: what about Monostatos then, who has just been banned? Double standards, even here? Or is it simply human nature and its inconsistency, even with the wisest? Or has Schikaneder not thought his libretto quite through? Talking about Monostatos: here, he was not black, he was a slave and thus ugly and despicable (hässlich in German derives from Hass, hate). So here, one of the different accusations of which the Magic Flute is the object, has been addressed. That is much more difficult when it comes to the misogynous lines throughout the text - at least Pamina had one movement of rebellion and through her apron at Sarastro’s feet, when he treated her too openly as an object. These considerations are without importance however, facing the principal message of this work: reason should always guide our choices, we must not be seduced by the simplified solutions of populists. Today, the link is all too evident between the Queen of the Night and believers in conspirations of all kinds - she is vengeful, unable to reason, guided by her emotions, ready to make her child a murderess in order to get what she wants. She was sung tonight by Aleksandra Jovanovic with exactly the right dose of majestic hysterics, almost shrill, but ever musical. Again, a rococo costume, with an extravagant hairdo, she represented precisely that mental night that would be chased away by the Enlightenment. Rococo characters too, but much more sympathetic: the three boys. In beige breeches, coat and jabots, they looked like the portraits of young Mozart. They were sung by one boy and two girls tonight: Zeno Böhmler, Amelie Spielmann and Anna Fiona Metzger. Simply adorable, they danced, jumped and walked, and sung with ease, real little cavaliers. Adorable also the other instinct-guided character: Daniel Gutmann’s Papageno was light and supple, he fell and rebounded like a rubber ball, and his clear lyric voice gave substance to all the emotions of the character. And adorable also Julia Sturzlbaum in the role of Papagena.

Since this was a very musical and choreographic staging, where all of the stage movements came straight from the music, for this Covid-tainted performance hugs, kisses, contacts of all kinds had been replaced by dances. And that worked very well, after all, dance has always been a classical sexual metaphor. Another sensitive point of this work are the spoken parts, which were perfectly mastered here, they rang true and natural throughout. One has to congratulate the singers whose mother language is not German for their impeccable pronunciation and diction.

A very enjoyable night at the opera, in spite of the restrictions, rich in food for thought, rich in colors and in musical enjoyment.

Bravi tutti and thanks to everyone involved!