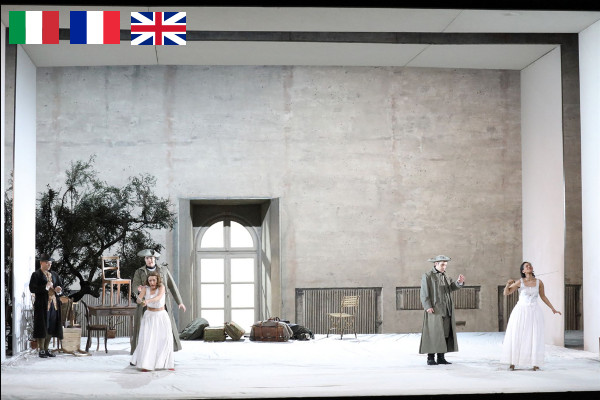 Munich Staatsoper, 27 September 2020 - These days, our hearts are broken for the orchestra and the staff of the Metropolitan Opera in New York: they will have to survive a whole season without any salaries, without any prospects. These days, it is particularly poignant to be present at a representation of live music, and we were particularly grateful to all the people who are working so hard to make this possible.

Maybe it was this very gratitude that animated the singers and the musicians tonight, they were so vibrant and present.

To allow for a show without intermission, the opera has been severely cut back, without too much harm done to the dramaturgy, although it is now the farcical side of the plot that has the upper hand as it were. (Soon we will be able to compare the different "Covid-19” versions of all the operas of the repertoire…) Thus, we found Don Alfonso, Ferrando and Guglielmo directly organizing the famous wager, without the preceding duets; we were deprived of a large part of the arias, of some recitatives and ensembles, and of the chorus. It was the orchestra that plays its interventions.

Dieter Dorn’s 1993 production was of timeless elegance. Jürgen Rose’s settings were pleasing in their simplicity and grace, and also thanks to Max Keller’s lighting: an exterior façade with an arched window, the outline of an olive tree, a blueish or golden light, a bistro chair - we were in a garden in Italy. For the interior scenes, a curtain and some white partitions were added, a table and an assortment of chairs were all the furniture that was needed. During the set changes, a curtain was drawn displaying the same façade, window and olive tree, all in different shades of grey, and parts of the action were simply taking place in front of it. All this, together with the costumes, also by Jürgen Rose, was utterly charming and in keeping with Mozart’s music, interpreted by a fabulous orchestra and wonderful singers.

Edwin Crossley-Mercer was an impeccable Don Alfonso, elegant in a grey suit of breeches and frock coat, with a colourful waistcoat and a jaunty round hat. His light baritone voice came out wonderfully in the trio "Soave sia il vento” and blended harmoniously with the feminine voices. The ladies were dressed successively in virginal white gowns and later on, flowery dresses - flowering into womanhood as it were, only to appear in in virginal white again at the end. Christiane Karg in the role of Fiordiligi was magnificent, she was the only one to sing both of her arias, to our great delight. With her crystal-clear warm voice, she gave substance to Fiordiligi’s every emotion. Just as wonderful was Angela Brower as Dorabella. She is the more adventurous of the two sisters, the first one to be seduced, and the mezzo-soprano got it just right. Dorabella is engaged to Ferrando, who will turn to Fiordiligi, whilst her fiancé, Guglielmo, will find himself in Dorabella’s arms. The gentlemen are soldiers and they appear at first in uniforms, and later disguised as „Albanians”. For once, the costume creator has respected the idea that they must not be recognizable and has draped them in a multitude of kaftans and turbans, all in different patterns and shades of grey, that are both pleasing and funny. Ioan Hotea sung the part of Ferrando, perfectly keeping the balance between cheekiness and emotion. His tenor voice was clear and agile and transported perfectly all the emotions of the character. When his voice and the soprano of Christiane Karg came together in the duet in Act II, after having struggled for so long to stay faithful to their rightfully betrothed, we ached with them and we felt that these two were made for each other. Andrè Schuen in the role of Guglielmo was just as convincing. With his powerful, warm and musical voice, and his vigorous acting, he was impressive, especially when Guglielmo got angry. It is no wonder that the girls gave up, once they had heard him roar "un contratto nuziale”, and didn’t try to defend themselves on the grounds of having been cheated themselves.

Last but not least, Tara Erraught’s Despina: Vivacious and mischievous, with a warm and generous voice, she was an ideal Despina. She was full of energy, as everyone else tonight, totally present and conveying meaning to every word that was sung. The thunderous applause and trampling were certainly well deserved, also by the Bayrische Staatsorchester under Antonello Manacorda. He took some very slow tempi, as they hadn’t been seen since Harnoncourt, and once or twice there was a slight wobbliness. The elegance and sensitivity of his conducting made up for this however. It was especially in the fake love duos, where the partner switch becomes real, that these slow tempi were enthralling. Seldom did we hear so clearly the heartbeat in the background of "Il core vi dono”, seldom could Ferrando sing his seducing line "sposo, amante, e più se vuoi” so intensely, calmly supported by the orchestra.

It was a night at the opera as we love them, when everything comes together. An opera evening that left us grateful for the time we had, filled with music and beauty, and deeply sorry for those who will be deprived of this for a whole season.

Heartfelt thanks to those who bring these moments about!